A collection of delicious eats and treats

One of the most popular items to add to brussels sprouts seems to be some version of delicious fatty meat (bacon, ham, prosciutto), but as divine as pork fat is, I think this dish stands on its own without the bacon crutch (though I’m certainly not judging if you decide to go that route…). Here, I simply roast the brussels sprouts, toast up some pecans, and drizzle some warmed maple syrup on the top. The result is a lovely vegetable side dish that is perfect to scale up for a crowd during the holidays, but easy enough to prepare any night of the week.

Start by preheating the oven to 400F. While the oven gets going, start cleaning your brussels sprouts. On this occasion, I had larger sprouts and quartered them (after removing the stems). If you have smaller brussels sprouts, you can just halve them. Unless the outer leaves look brown, make sure you’re not throwing them away with the scraps. The roasted leaves get really dark and crispy in the oven, and are even better than their popular cousin the kale chip.

Spread the sprouts on a large baking sheet. I aim for something with low sides, as a high-sided pan will steam them and won’t allow them to crisp up as nicely. Then, drizzle the sprouts with olive oil, sprinkle with salt, pepper, garlic powder, and some red pepper flakes. I use my hands to toss everything together in the pan.

Once the oven is preheated, roast the brussels sprouts for 30-35 minutes and get started on the pecans. If you’re too busy and want a ‘set it and forget it’ dish, you can just add them to sprouts in the oven. I like to toast the pecans separately though, as I find that they get a better crunch that way.

In a small, dry sauté pan, toast the pecans over medium heat for about 7 minutes. As the pecan has a darker color exterior, it can be hard to tell when they’re done, and they’ll burn in an instant. To avoid this, I usually move the pan around a bit every minute, and once I can smell the aroma of the nut, I take them off the heat.

Halfway through roasting, take the brussels sprouts out and shake them around a bit. This is usually the point where I start picking out the crispy leaves to ‘try’ them.

When there’s a couple minutes left, add the maple syrup to a small saucepan over medium-low heat. You’re not trying to cook or reduce the syrup, just warming it.

Continue roasting until at least half of the sprouts are a very dark brown. Don’t be afraid of the color! Color=flavor. You can see in this shot below that some of the sprouts are right at the edge of burning – that’s what you want! You’ll also see that about 90% of the crispy leaves are missing…but I digress.

Now it’s time to assemble, I like to serve this family style on a big plate. Simply mound the brussels sprouts, top with the pecans, and finish with a big drizzle of maple syrup. Yum!

Makes: 2 large servings, though easily manipulated to serve a crowd

Clean your brussels sprouts by removing the stems, quartering large sprouts, and halving smaller ones. Spread the sprouts on a large baking sheet. Drizzle the sprouts with olive oil, sprinkle with salt, pepper, garlic powder, and some red pepper flakes, and toss together until coated.

In the meantime, toast the pecans in a small sauté pan over medium heat for about 7 minutes.

Separately, add the maple syrup to a small saucepan over medium-low heat until warmed through.

Once the brussels sprouts are done, mound them on a dish topped with the pecans, and finish with a big drizzle of maple syrup. Enjoy!

One thought on “Brussels Sprouts with Pecans and Maple Syrup”

This site uses Akismet to reduce spam. Learn how your comment data is processed. 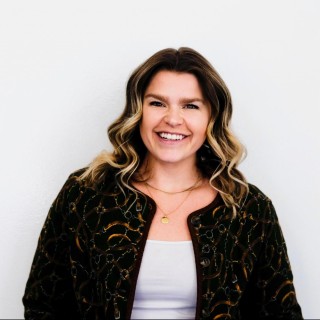 I grew up outside of Rochester, NY and am making Kennebunk, ME my home! You can find me cooking (most nights), reading (anything & everything), taking up new hobbies (currently: needlepoint!), working out at Orange Theory, and hanging with my husband Andrew and our pup Baxter. I think all the best foods have elements of crunch, salt and a hint of sweetness, and no matter what I’m eating - I always save the best bite for last.